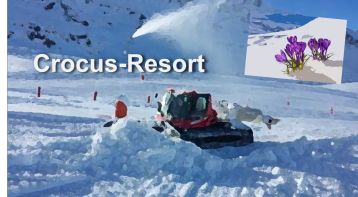 The understanding and implementation of snow management in detailed snowpack models is a major step towards a more realistic assessment of the evolution of snow conditions in ski resorts concerning past, present and future climate conditions. In this context, a new module accounting for snow management processes (grooming, snowmaking), named Crocus-Resort, has been integrated into the snowpack model Crocus. As for grooming, the effect of the tiller is explicitly taken into account and its effects on snow properties (density, snow microstructure) are simulated in addition to the compaction induced by the weight of the grooming machine. As for snowmaking, the production of machine-made snow is carried out with respect to specific rules and current meteorological conditions. Crocus-Resort has been proven to provide realistic simulations of snow conditions on ski slopes (for more details on the scientific intent of this development, please refer to the paper 2016_Spandre_CRST_Crocus_Resort.pdf available here below).
Technical note: in Crocus, the decisions to produce machine-made snow are defined in the routine snow_making.F90, while the impact of snowmaking and grooming on snow properties is coded in the routine snowcro.F90 (sub-routines SNOWNLFALL_UPGRID, SNOWCROCOMPACTN and SNOWGROOMING).

In order for Crocus-Resort to be run, a new set of options have been added to the namelist:

The Boolean options for grooming and snowmaking are presented below.
It is possible to activate grooming without activating snowmaking, and the other way around.
This latter case, however, is not meaningful, since in practice the machine-made snow has always to be groomed once produced.
More details can be found in the document Wiki_Crocus_resort_Developers_20170626.pdf.

The computation of the viability index (also called snow reliability index) can be realized based on the example of the python script 20170922_Traitement_viab.py (see below) and the data describing resort locations (20180820_Fichier_poids_France.csv). A manual describing the method has also been added to this page (20170922_Calcul_viabilite_s2m.pdf).

The Crocus-Resort module has been modified in order to be used to run the PROSNOW modeling chain (www.prosnow.org).
The main changes compared to the previous version and their scientific interest are briefly presented here.
Technical note: the main changes have been made in the routine snow_making.F90.

Nothing special, for now...